10 Ways to Beat the Heat 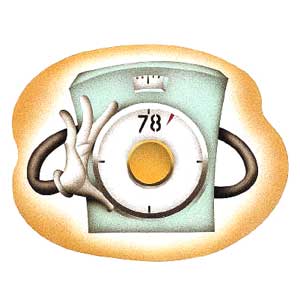 Cool down and save some cash. No, it's not your imagination—it definitely is getting hotter. The eight warmest years on record occurred over the past decade. But staying cool this summer doesn't necessarily mean you have to pay a fortune to keep the air-conditioning running day and night.

No, it's not your imagination—it definitely is getting hotter. The eight warmest years on record occurred over the past decade. But staying cool this summer doesn't necessarily mean you have to pay a fortune to keep the air-conditioning running day and night. Here are 10 tips—most costing less than $25—that will keep you comfortable and cut the typical $1,000 cooling bill by as much as half. What's needed to get the temperature to drop? Only a little time and a few changes in your routine.

Typical air-conditioning settings for a programmable thermostat at different times of day:

If you have central air, set your thermostat above 78 degrees (all temperatures cited here are in degrees Fahrenheit). You'll save 5 to 8 percent on cooling costs with each degree above that mark. For a typical household, setting the thermostat at 80 degrees saves 10 to 15 percent; raising it to 85 degrees will save 35 to 55 percent.

When you leave home for more than one hour, set the thermostat to 85 or 90 degrees. Reset it upon your return, and the room will cool down in only 15 minutes. The system will use less energy during the cool-down period than if you had left it running at a lower setting while you were out.

A fan, which costs two to five cents per hour to operate, will make a room feel 4 to 6 degrees cooler. Also, a fan works well in tandem with an air conditioner because the dehumidifying action of the air conditioner provides drier air that the fan can then move around.

In frequently used rooms, install a ceiling fan (set it to spin counterclockwise in summer). You'll save the most money by running the fan only when you're in the room. A motion-detector switch (around $20), 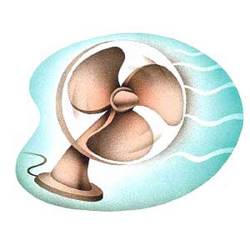 which turns the fan on when you enter a room and off when the room is empty, is a good addition. However, if you have pets that move in and out of the room, make sure the switch can be turned off manually. Otherwise, your pets can cause the fan to run while you're away.

If nighttime temperatures drop into the 70s where you live, you might want to purchase a whole-house fan, which runs $300 to $600 installed. This type of unit goes in an upstairs ceiling, ideally in a central hall. When run at night with the windows open, the fan will pull cool air into the house as it vents hot air out through the attic. Most models are designed to slip in between joists for easy installation. Whole-house fans, which draw only as much power as a couple of lightbulbs, are usually outfitted with a variable-speed switch and/or timer. If you install one, be sure to get an insulated box to cover the portal in winter.

How to Install a Ceiling Fan

"Texas cool" is a morning and evening routine that takes advantage of cool outdoor temperatures at night and keeps the heat at bay as much as possible during daylight hours. It's very simple to do: At night when the temperature drops, open windows and bring in cool air with window fans or a whole-house fan. As soon as the sun comes up or the air starts to heat up, shut the windows and shades and keep doors closed. 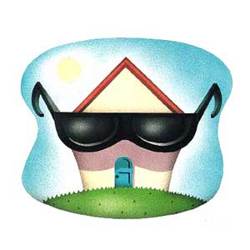 As much as 20 percent of summer heat enters your home as sunlight shining through windows. To cut "solar gain," add curtains or blinds to rooms that get direct sun and draw them in daylight hours. With the shades drawn, a well-insulated house will gain only 1 degree per hour when outdoor temperatures are above 85 degrees.

Pay special attention to west-facing rooms late in the day. Shades and blinds to consider include roller shades (the least expensive option), venetian-type micro-blinds, reflective curtains and insulated curtains (the most expensive, at $100 per window). Two exterior options are to install awnings or plant shade trees.

How to Install Window Shades

A programmable thermostat lets you preset temperatures for different times of the day, so air-conditioning is working only when you are home. The least-expensive thermostat models ($30) let you set four cycles that, unless manually overridden, repeat every day. Higher-priced models ($50 and up) allow you to create settings for each weekday and for each weekend day.

These thermostats come with complete directions and are easy to install. Just remove the old thermostat, unscrewing the wire leads attached to the terminals on the back. Reattach those wires to the terminals on the new model (in a system with separate A/C and heating units there may be four leads on the back, two for each unit). AA batteries maintain the settings if the power ever goes off.

How to Install a Programmable Thermostat 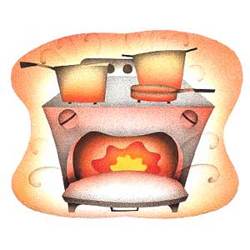 Any appliance that generates heat adds to your cooling load. An oven baking cookies can easily raise the room temperature 10 degrees, which in turn jacks up overall cooling costs 2 to 5 percent. Save cooking (especially baking) for cooler hours, or cook outdoors on your grill. It is also a good idea to run the dishwasher and clothes dryer at night.

Cost: $0
Benefit: 2 to 5 percent off your cooling costs

Incandescent bulbs don't contribute as much heat as unshaded windows, but they do add heat to a house and can raise the perceived temperature, sending you to the thermostat to seek relief. To reduce this hot-light effect and save lighting costs year-round, replace incandescent bulbs with compact fluorescents. They use about 75 percent less energy and emit 90 percent less heat.

Cost: $12 to $25 per bulb
Benefit: Up to 5 percent off your cooling bill plus electricity savings

Snug Up the Ducts

Leaky ducts can cut into air-conditioning efficiency. Ductwork must be balanced between the supply and return sides of the system in order for it to work safely and efficiently, so making a repair in one section can cause a problem in another. Leak-prone areas include the return plenum; where branch ducts meet the trunk line; and where ducts attach to outlets. Also, insulate ducts that run through a hot attic with a blanket of R-11 fiberglass insulation.

Unless the duct repairs are minor, it's wise to leave them to a HVAC pro. While the contractor is on site checking your ducts, have them tune up the air-conditioning unit by cleaning filters, unplugging coils, unblocking drains and lubing the fan.

Cost: $75 to start for a service call
Benefit: Up to 40 percent off your cooling bill 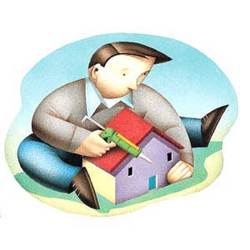 The places where cold air infiltrates in winter are routes for hot air in summer. And what's worse, hot air is often accompanied by high humidity, making you even more uncomfortable. Armed with a flashlight, exterior-rated silicone caulk and a couple cans of expanding foam insulation, hunt down and seal all leaks. Concentrate on the attic, basement and crawl space; pay close attention to anything that passes through a ceiling or wall, such as ductwork, electrical or plumbing conduits and kitchen and bath vents. Other common leaky spots are around windows and doors. If you can rattle a window, it's leaking. Seal it with weather stripping.

The temperature in your attic can reach 150 degrees on a hot summer day, a situation that if left unchecked can drive up cooling costs by as much as 40 percent. If your attic has less than R-22 insulation—7 inches of fiberglass or rock wool, or 6 inches of cellulose—you should add more. (The U.S. Department of Energy says most homes should have between R-22 and R-49 insulation in the attic. To check what's right for your region, go to the Department of Energy website.)

Before insulating, seal around recessed lights, vents, and plumbing and lay down a 6-mil polyethylene vapor barrier. When insulating, place boards across the tops of the joists to walk on, and as you insulate, don't cover or pack insulation around a bare stove pipe, electrical fixtures, or any other equipment that produces heat, unless the fixture is labeled as suitable for direct contact with insulation. Otherwise you risk fire.

Also make sure your attic is ventilated. Gable vents (around $25 each, plus $75 per vent for labor) can lower attic temperatures about 10 degrees; a ridge-and-soffit ventilation system (an extra $200 during reroofing) will reduce attic temperature to around 100 degrees.

When reroofing, use white or pale-gray shingles instead of dark ones. These keep the attic cooler than dark shingles.

Cost: approximately $25 each for gable-end vents; around $200 for ridge-and-soffit ventilation in a new roof
Benefit: Longer shingle life, and up to 20 percent off your cooling bill

Related Articles from This Old House